The 9 most aphrodisiac foods of natural origin 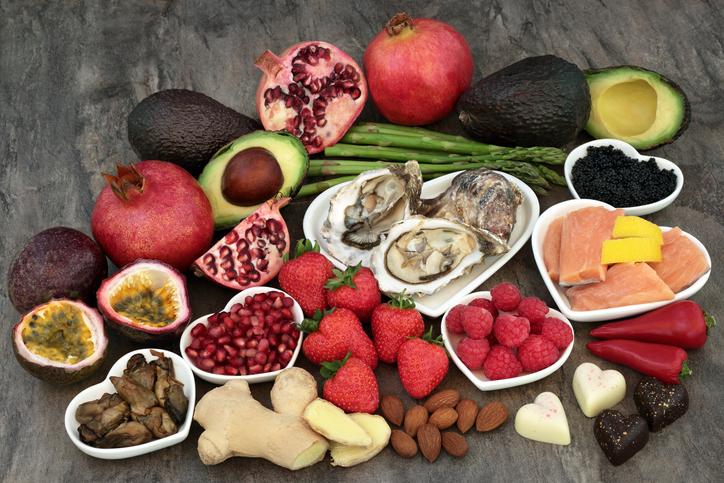 The 9 most aphrodisiac foods of natural origin

It all adds up in one date. You start with the place, which should surprise you: the choice of place is comparable to the choice of clothing or haircut; two first impressions that only someone with Plato's ability could change, which is often not the case. Then there is the drink, which should accompany the conversation in the same way that it is accompanied later on the way home, which is what a date is at the bottom: meeting to return home. Music and light follow, responsible for teleporting those mentioned very far from where they are, in the same way that a good movie does. And, most importantly, the food. Because all this that happens on a table –according to the poet Luis García Montero, one of the few objects with the capacity to also be a place– is part of an enormous choreography: that of chemistry.

There are certain foods with a high impact on sexual life. They affect our hormones, producing them, and our senses, stimulating them. But where does science end and mythology begin? The studies do not agree, but one thing is clear: either way, they work.

One of the crown jewels. Increases dopamine levels, which contributes to increased libido in men and women. In addition, they are a great source of zinc, responsible for regulating testosterone. But the most important thing: they are associated with sexual pleasure and activate the nerve neurotransmitters, which are responsible for the formation of sexual hormones.

Let's see, we already know that it is not for everyone. We're not even proposing to go on a date to drink tabasco, no. But there is a middle ground and many dishes that have a spicy touch. If we recommend it, it is because it is rich in flavonoids, which help increase circulation. That is, as a kind of natural viagra.

Is alcohol considered as an aphrodisiac? Yes, we know what you're thinking, but wait.Red wineis rich in antioxidants and has a powerful vasodilator effect. In Christian: increase the flow in the genitals of him and her. Yes, without going overboard.

Well, generally all seafood, but we wanted to narrow it down to one food. The reason is similar to that of oysters, which is their high zinc content. But there's more: studies show that couples who eat more seafood enjoy better sex life and are more likely to get pregnant.

No, it hasn't sneaked up on us. This root that you may not know is widely used as an aphrodisiac. The reason is that it acts positively on the nervous system and reduces fatigue and stress, so sexual energy has the free path it needs.

"Chocolate is the substitute for sex." Let's see, maybe not so much. But the truth is that the debate has always been there, especially on Valentine's Day. Why? Well, because it releases endorphins and serotonin, responsible for happiness and well-being.

In addition to being a very healthy fruit, mangoes have beta-carotene, which boosts the production of testosterone and estrogen. It also helps in the production of sperm and, thanks to tryptophan, increases pleasure.

Tradition says that newlyweds were given mead and that's where the "honeymoon" comes from. But what about that? Well, because honey contains boron, a magnificent regulator of progesterone and estrogen.