9 iron-rich foods to deal with anemia 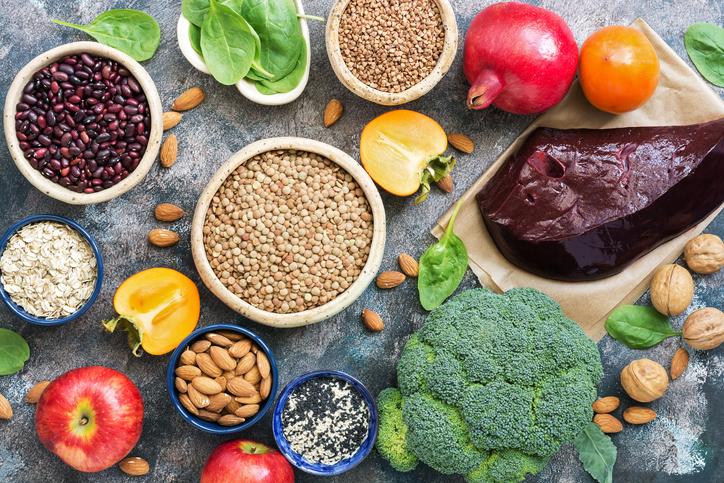 9 iron-rich foods to deal with anemia

Tiredness, fatigue, weakness or paleness are some of the symptoms experienced by people with anemia: a condition that occurs when the blood produces fewer red blood cells than normal. When this happens, the red blood cells are not able to carry as much oxygen as they should.

Anemia is especially sensitive in infants or children, pregnant or lactating women, or women with a high level of bleeding during menstruation. The good news is that many times the problem can be solved with a diet rich in iron, the key mineral for the transport of oxygen in the blood. For this reason, we recommend mixing them with foods that contain vitamin C, since it improves its absorption, and avoiding doing so with others that prevent it, such as whole grains, tea, coffee, vinegar or red wine.

Not all legumes are the same, but in general they are a great source of iron. Specifically, soy is the one that has the most: it is recommended to eat between 8 and 18mg of iron per day, although it varies according to sex and age, and soy has 15.7mg per 100 grams. Lentils, chickpeas or dried beans are also good options to alternate with soy.

The egg has always been known to provide a lot of protein, but it is also a positive food for people suffering from anemia: it has 7mg of the mineral per 100 grams.

Here comes the spinach, which has always had a reputation for concentrating a lot of iron, although they are not the most: 4mg per 100 grams. In fact, clams or legumes provide more of the mineral. But in general, both they and broccoli, peas, Swiss chard, and especially parsley, are still very good options.

It is recommended not to consume more than two pieces a month because they have a lot of saturated fat, but they also provide more iron than any white meat: 2 mg per 100 grams and, in the case of pork liver, its contribution reaches up to 18 mg.

There are many nuts, so we recommend pistachios, cashews and almonds. And the peanuts? They are actually a legume and shouldn't go here, but since we know that in the collective imagination they fall within nuts, we also include them. Roasted peanuts are a good option but we stick with pistachios: 7.3mg per 100 grams.

Yes, dry and iron get along. In the case of dried fruits, we recommend dried grapes and dried figs, with 3mg per 100 grams.

Desserts can also be good allies to increase the number of red blood cells in the blood. An ounce of dark chocolate, about 28 grams, provides 3.5mg of iron.

Wholemeal bread, but also rice or pasta when they are enriched with iron, are a good source of the mineral. Wholemeal bread has 2.5mg, so combine it with any of the above foods and you will have a sandwich that is rich in iron.